It’s all about balance for me. Working hard and rewarding yourself every so often. So hey, Friday!

A fitting name, Fatman’s Pizza sounded like it could either be disgusting or great; literally nothing in-between. And I have to say, it lived up to its name.

For starters, when I rolled up to Fatman’s, it was this teeny place on Niagara Falls Blvd. The doorway itself was even small and fairly run-down, the kind you’d see at a cabin made of all wood with a screen on it. Not the fanciest establishment, but sometimes the best places aren’t and that’s what gives them character. 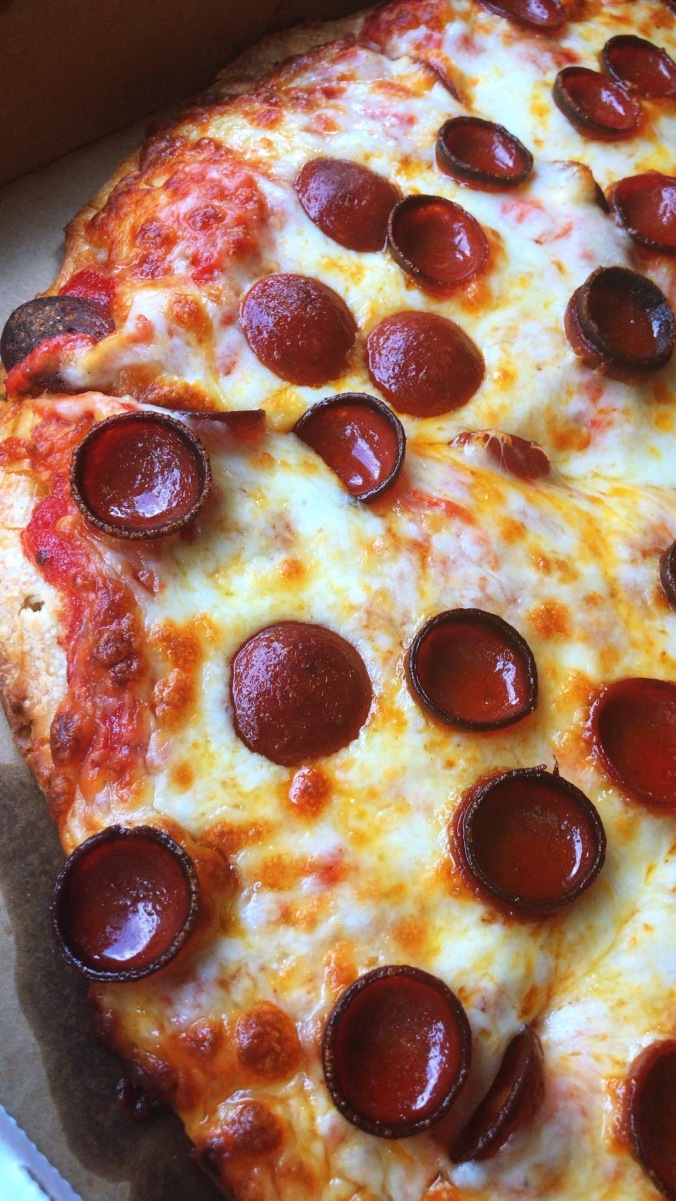 This all doesn’t matter in hindsight though because the staff was so incredibly nice! When picking up my pepperoni and cheese pizza, they took the time to open it up, make sure I was happy with it, thanked me for my business and sent me on my way. You don’t always have this kind of thorough interaction since pizza places move so fast typically.

The dough was nicely thick and chewy. This is sometimes hard for certain places to achieve without making the dough really dense.

Fatman’s did a good job of keeping the dough moist with a little bit of crunch as well. One of my biggest pizza pet peeves is a dry end crust that just dissolves in your mouth like sand.

The dough was a pleasant surprise as I really didn’t have the highest expectations to begin with.

As for toppings, we love a thick layer of cheese! Fatman’s was not shy on the cheese. And somehow, it did hold its own without falling off the pizza like a hot mess. It was also chewy along with the crust.

The sauce-to-cheese ratio was a little lighter on sauce and heavier on the cheese. Honestly though, this was totally fine since the cheese and dough were already on the thicker side. Having too much sauce would’ve really put this thing over the edge.

And just look at those pepperonis (*heart eyes*).  These roni cups were just the right amount of crispy around the edges without being too charred throughout. They had a thicker cut on them too, so it was super filling.

I have to say, Fatman’s really stays true to its name by adding a good volume of toppings. They are incredibly generous and I love when my dollar goes farther than anticipated!

Between the thicker dough, heavier cheese, and lots of yummy pepperoni on top, this was a superb example of a Buffalo-style pizza. Super indulgent, semi-messy, and always craving more.

So I’m sending a big thank you to you, Fatman’s! You were a for sure hole in the wall, but a good find indeed.