I’ve been living in Buffalo for going on two years now and I still had not been to Franco’s Pizza until recently. Boy, have I been missing out.

Most pizza in Buffalo is relatively higher priced, or at least that’s what I’ve found compared to my hometown or when traveling. Granted the pizzas seem to be bigger, so I guess there’s that. But for this occasion I didn’t want some huge large pizza, nor to pay a ton either. So I came across Franco’s who kindly serves personal pizzas! This was much appreciated.

I ended up ordering a cheese and pepperoni personal pizza for myself. When I went to go pick it up, they were pretty busy I have to say. The shop wasn’t huge, and there were a lot of people waiting for their orders. The employees were running around like crazy and their were boxed orders lined all up the wall on a shelf ready to be picked up. I took it as a good sign this was going to be some solid pizza.

From their website pictures of their pizza, the pepperonis looked like flat ones, not small cup-and-char. I was interested to see what these tasted like. When I got my pizza, the pepperoni was like a hybrid of the two. They were super thin pepperonis like the flat ones, slightly smaller, and crisped up at the edges like a cup-and-char. I haven’t seen anything like this, but it was damn good.

As for the cheese, this was probably the best part. I can’t pinpoint what made this so good, but I definitely think the burnt spots through contributed to it. Like I mentioned, it just reminded me of pizza that is oddly satisfying from somewhere like a random gas station. It was different, unexpected, and so good. 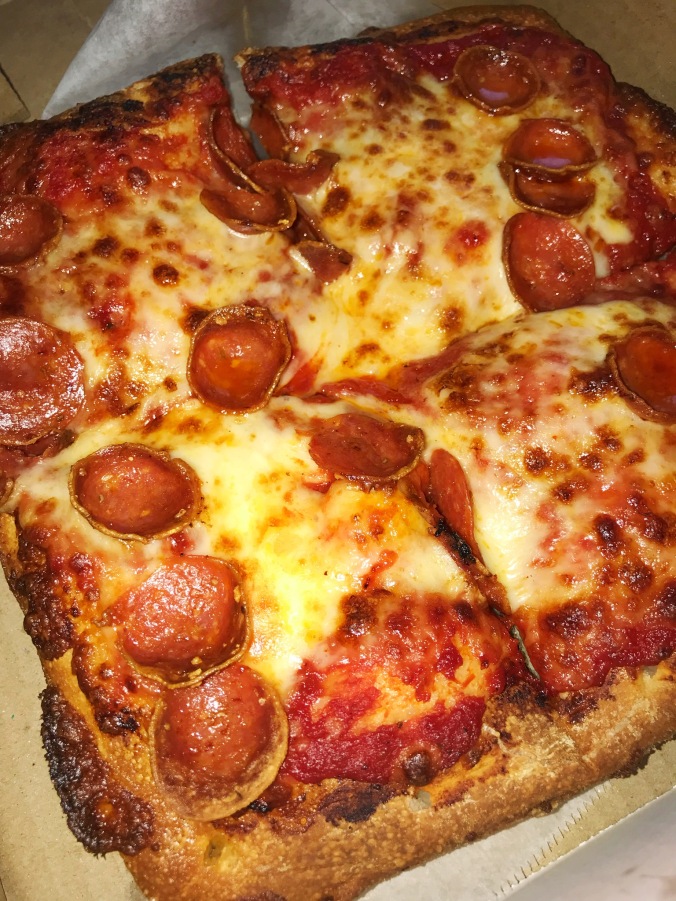 My only complaint is that there was a little too much sauce for my liking. I prefer my pizza to be on the lighter side for sauce, so when sauce was dripping off with a couple bites it made it difficult to eat unfortunately. I also loved the taste of the cheese and pepperonis, so when the sauce was overpowering those flavors, it wasn’t as good.

As for the crust, this was thicker than some Buffalo-style pizzas I’ve had. The dough was incredibly light and airy though, so it wasn’t overly chewy or dense. The end crust was charred and smokey just how I like it. Since the sauce was a bit extensive, it was nice to have enough dough to absorb it all together.

Franco’s, you brought me to some place special eating cheap, delicious pizza and for that I’m thankful.