Frankie Primo’s wouldn’t be my first choice to go for pizza, but since I was gathering there for lunch, I figured I’d try a pie from them. Especially on the rainy day I went, they have the perfect cozy, low-lit, intimate atmosphere for a pizza and a glass (or two) of wine.

After I ordered my glass of Riesling, I began to review their menu. There was a decent variety of pasta dishes, salads, and pizzas to choose from. Just within the pizzas alone, there were several red and white options. Many sounded good, but I decided to go with the a white pizza. This one had asiago, a garlic cream sauce, red and green peppers, onions, and chicken breast. It sounded filling, and it was.

I honestly didn’t know what to expect with a pizza from here, but it was decent in size. I could have definitely split my pizza with someone had I’d known it would be enough for two. I ended up taking about half of it home even. 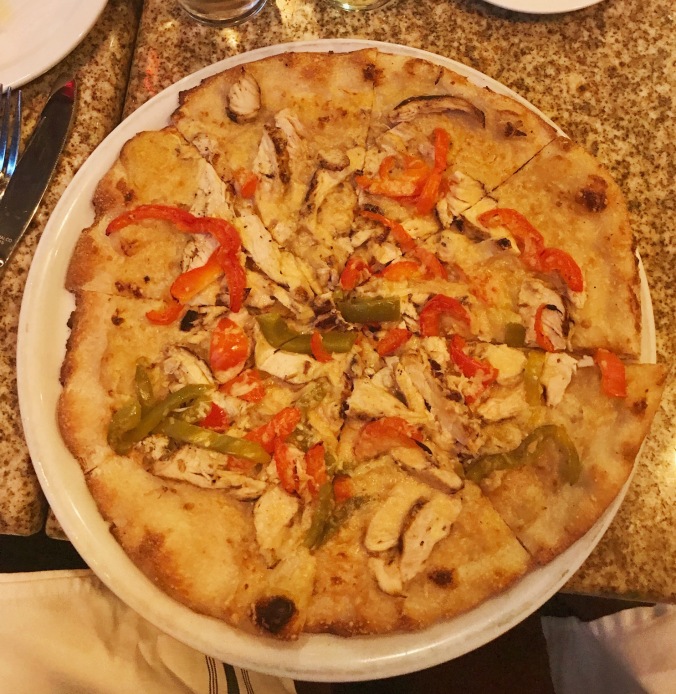 The presentation of this pizza was not too pleasing. It did look a little messy and overcrowded. This was particularly because the chicken and peppers were very long strips and could have been chopped finer. It was differ to eat without something rolling off or taking too big of a bite to chew. Perhaps this was just this particular kind of pizza, so if I do find myself there again, I will get something with minimal, smaller toppings.

A Lot of Everything

The taste itself was solid. Asiago cheese has such a different taste to it than mozzarella, so I was reminded that I do like asiago.

The cheese worked well with the light hints of garlic from the cream sauce. These flavors from the white pizza paired well with my Riesling as well. 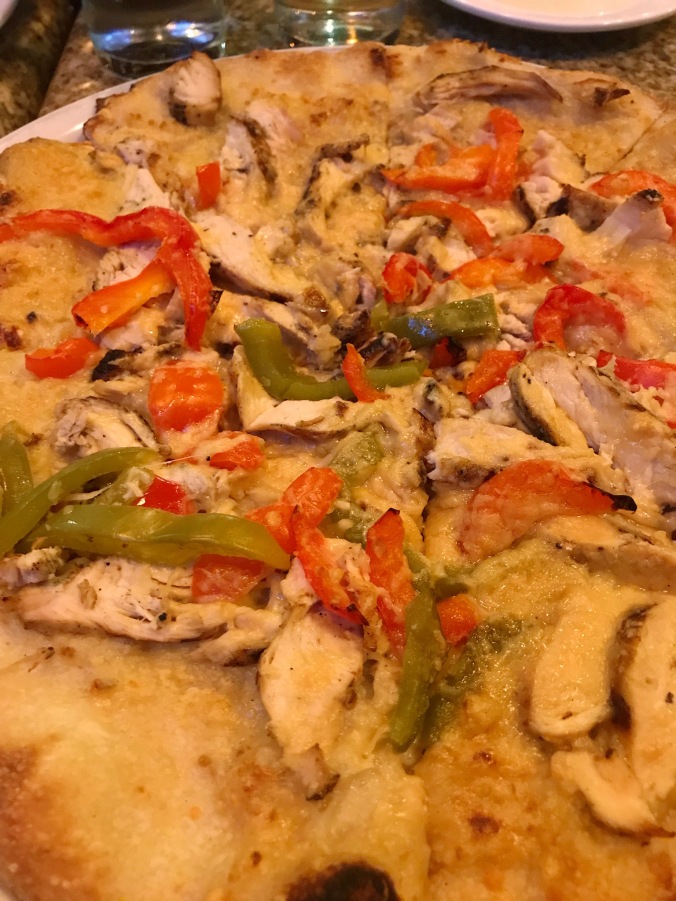 The peppers and onions had a mild taste and weren’t too overpowering considering how large they were. As for the chicken, I could have done without it on this pizza. It was pretty bland and dry on top of being so large. I think I would have preferred a sausage or no meat even with this pizza.

The best part about this pizza though was the crust. I did like the taste. It was soft yet firm, considering the weight from the toppings. Plus on this rainy day I visited, bread was honestly all I wanted! So if I do make it back to Frankie Primo’s, I’ll definitely be in the mood for some sort of comforting bread again, or perhaps a red sauce pizza.