For weeks now, I have been trying to find a pizza that can top Mustachio’s Pizza. I prefer a pizza that’s on the crispy side, can hold it’s own, isn’t shy in size, and has an equal amount of everything involved. D’Agostino’s Pizzeria did just that.

Literally one of my favorite days to completely pig out—the cherished Super Bowl Sunday. Beer, food, friends, football, and America. Pizza and wings are a must-have on this day of year, of course in combination with allllll the dips and chips your heart desires.

After great success from you all last time, I opened up the vote again on my Instagram Story. Some folks sent me recommendations for what I should spend my Super Bowl Sunday grubbing on, and D’Agostino’s Pizzeria was mentioned more than once. So, I figured I’d give it a shot.

Eating with a group of friends, we stuck with the standard pepperoni and cheese pizza, as well as medium wings. The tougher decision here was really how much to get. We thought two larges (eight slices per large) might not be enough for six people, but it was far too much! The slices were quite large, in fact, that we only made it through about one pizza.

When I called to order, they actually had mentioned that they were all booked, but somehow were able to squeeze me in. Their polite customer service and genuine care in making sure we were satisfied was very appreciated!

Located in a little plaza on Dick Rd., D’Agostino’s seemed so hidden. But aren’t all of the best pizza shops like that? I loved how small it was, with only a table or two inside, and perhaps that made me appreciate how good the pizza was even more.

The small window to pay was a cute kind of tiny as well—so you could only get a glimpse at all of the hard work and delicious food being prepared in the back. Granted it was the Super Bowl, but it seemed like all of the D’Agostino’s staff were really enjoying themselves.

Balanced The Whole Way Through 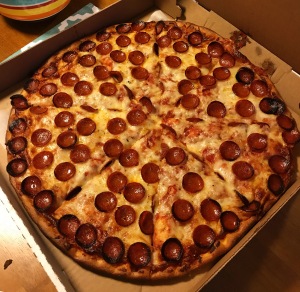 Philadelphia wasn’t the only winner of the Super Bowl. This pizza was fantastic! It even had a lot in common with the football winner:

Looking at photos of their pizza prior to ordering, I didn’t believe that you would actually receive that MANY toppings. They definitely don’t skimp out and it’s worth your money—I’m adding another topping next time! 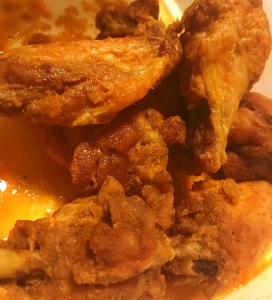 And as for the wings… outstanding as well. They were full of meat, the classic Buffalo flavor, and crisp. These will be on our order next time—and yes, there will be a next time.